We’ve talked about the importance of understanding how Bones Move and 2 weeks ago we discussed some rehab strategies for Ankles.  So today we will talk about a key step in our thought process, Joints Feel.  On the surface of it, it’s really simple to understand what movement a joint has, i.e. there are 6 movements at the hip:

Though the names may vary at other joints they are along the same theme, 3 planes of motion, 2 directions in each plane.  This is what is traditionally taught and will get you a long way.  However, as I’ve spent a long time working and studying with the likes of John Hardy, Gary Gray and Dave Tiberio I have come to realise that the joint motion is only half the story in what a joint feels.  The next step to take is ‘how‘ it feels the motion. I think this is one of the most important things I’ve ever learned about movement.

A joint motion is ultimately named by what the distal bone of the joint does relative to the proximal bone.  If we use the right knee as our example.  If the femur does not move and the tibia is rotated to the left the knee joint will feel internal rotation.  If instead the tibia was rotated right the knee would feel external rotation.  It’s pretty easy when things are so static, but becomes a little more complex during functional movement.

How is the Joint Feeling the Motion?

The other 3 motions will be: 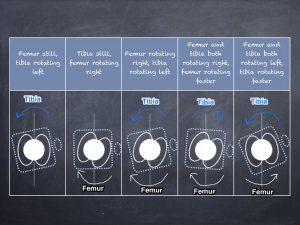 The example of knee motion above is really simple in isolation, but during even simple functional movements, working out what a joint is feeling in all 3 planes at the same time can be a little more tricky!!  However, if you  have first worked out what the proximal and distal bones are doing in all 3 planes you will be able to work things out.

In the bones move post I set you a little challenge to work out what the right femur was doing in all 3 planes in the front leg of gait:

This is does obviously depend on the actual technique of the individual squatting, but it is a good starting point.  If we continue to think about the knee, we now need to know what the tibia is doing to truly understand what the knee is feeling.

Translation: forward, left and down

If we go plane by plane, we can work out not only what the joint is feeling, but how that motion is achieved.

If the femur is tilting right and the tibia is tilting left the the knee will be abducting (valgus), both bones moving in opposite directions.

This is a little more tricky, as both bones are moving in the same direction, both are rotating left.  So you have to figure out which is moving faster.  I look at where the movement is driven from, which tells me which is moving first and further.  In the case of a squat the left rotation is driven by the pronation of the sub talar joint.  This means that the movement is driven from below, which means the tibia is moving first, further and faster.  If this is the case, the knee will feel internal rotation…both moving in the same direction, distal faster.

Our squat example showed not only what the knee was feeling (flexion, abduction and internal rotation), but also how the joints feel the motion.  How they feel it is much more useful clinically, because you can choose the joint motion that is deliberately different (often useful in acute injuries) or you can exactly replicate how the joint achieves the motion, which is really useful in chronic/overuse type injuries and near the end stage of rehab.